Let’s look over an example of how to connect an office LAN to the Internet with using a Cisco ASA firewall. For this example, we will use the junior model of the lineup – Cisco ASA 5505. Its main distinction from the higher-end models is the 8-port integrated switch, that allows to have 8 switch ports on board(Layer 2 of OSI model) . These ports cannot have an IP address assigned to them, but if you want to create Layer 3 interfaces, you can configure a virtual interface (VLAN) and assign IP addresses there. Assigning a port to a VLAN will allow you to use an IP address for that port, just like assigning one to an interface of a router.

In this example we will use:

Our task: allow the internal LAN hosts to access the Internet through the firewall. 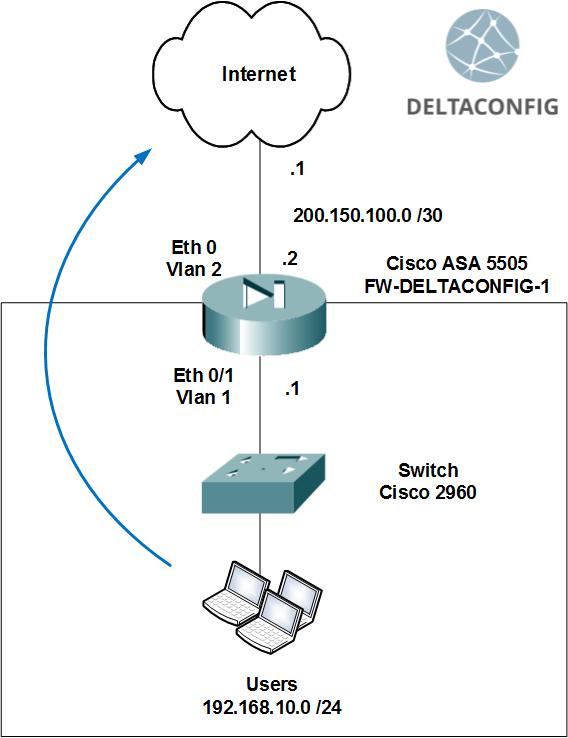 (Should be done only on new or test lab equipment, since it completely erases all existing configuration)

Lets completely erase the startup configuration of the device. To do this, connect using a console cable to the console port of the device, enter the CLI and type:
ciscoasa(config)# clear configure all
After this confirm the deletion of all configuration files.

Unlike with Cisco routers, you don’t have to reload the device in order to erase its configuration. The command “clear configure all” executed on the firewall leaves only the service lines from factory configuration and you can immediately begin to configure your device afresh.

In order to give your device a hostname and make it easier and more convenient to administer later, use the command “hostname ”
ciscoasa# hostname FW-DELTACONFIG
FW-DELTACONFIG#

At the very minimum, you need to configure two interfaces on your firewall: the outside and the inside.

The outside interface will communicate with the Internet. Configure it with the IP address and subnet mask provided by your ISP:
FW-DELTACONFIG (config)#
interface Vlan1
nameif outside
security-level 0
ip address 200.150.100.2 255.255.255.252
no shut

At this point you have to attach your virtual VLAN interfaces to real Ethernet ports.
Here is how you tie together the outside interface and port Ethernet0/0:
FW-DELTACONFIG (config)#
interface Ethernet0/0
switchport access vlan 1
description --- WAN ---
no shut

Important!
Notice that the line with “switchport access vlan 1” command will not be displayed in the running configuration output (the one shown with the “show run” command). The reason for this is that VLAN 1 is configured for each physical interface by default. When you configure any other VLAN tag, except the default one, you will see the line in the running configuration.

In order to configure remote access for administration of your device through SSH protocol, you need to do the following:
Create a password for privileged mode (#). Enter your desired password instead of “XXXXX”:
FW-DELTACONFIG(config)#
enable password XXXXX
Create an administrator account. Enter your desired password instead of “YYYYY” for the user admin:
FW-DELTACONFIG(config)#
username admin password YYYYY privilege 15
Specify the authentication method and generate the RSA keys:
FW-DELTACONFIG(config)#
aaa authentication ssh console LOCAL
crypto key generate rsa modulus 1024
/confirm by pressing y
Specify the IP address of the administrator workstation, from which to allow remote access via SSH and the interface for accepting remote access requests (inside). You can specify multiple IP addresses or entire networks to be designated as management.
FW-DELTACONFIG(config)#
ssh 192.168.10.100 255.255.255.255 inside
After performing these steps you should be able to access the firewall through the SSH protocol from the workstation with IP 192.168.10.100.

In order to route packets to the Internet, your firewall needs to have the default gateway (the closest IP address on the ISP side) and the interface, through which it can be accessed (outside) configured.
FW-DELTACONFIG(config)#
route outside 0.0.0.0 0.0.0.0 200.150.100.1

After configuring the default route, you can check both the availability of your ISP and your access to the Internet. You can do this by pinging any address available in the Internet. For this example, we’ll take the IP address of the most-pinged resource – google DNS (8.8.8.8)
FW-DELTACONFIG#ping 8.8.8.8
Type escape sequence to abort.
Sending 5, 100-byte ICMP Echos to 8.8.8.8, timeout is 2 seconds:
!!!!!
Success rate is 100 percent (5/5), round-trip min/avg/max = 3/8/15 ms

Important!
Please note that, at this stage, you can only send ICMP requests from the CLI of your Cisco ASA device. The workstations in your LAN will not have access to the Internet until after performing the next steps.

Step 5.1 NAT for access to the Internet (from inside to outside, PAT)

In order for the LAN hosts to have access to the Internet, their private (grey) IP addresses need to be translated into a public (white) IP address.

After configuring PAT in this way, your LAN workstation IP addresses will be dynamically translated into the IP address of the outside interface.

Important!
You can also translate traffic into a specific IP address, not assigned to one of your interfaces (this works when your ISP allocated you a subnet larger than /30).

In all other cases the NAT translation will not work correctly, if it manages to work at all.

Step 5.2 NAT for access from the Internet to a resource in the internal network (static NAT)

If you need to organize access from the Internet to an address in your LAN, for example for a web server, then you have to configure static NAT translation.

This configuration will force all traffic sent to the outside IP address of the firewall to be redirected to the internal LAN address 192.168.10.200.

In this case only the traffic sent to the outside interface of your firewall for port TCP 80 (HTTP protocol) will be redirected to the internal LAN address 192.168.10.200.

Important!
Please note that simply creating NAT rules does not provide access to the resources being configured. In order to have access to those resources, you need to also configure access lists and attach them to the relevant interfaces. By default, the firewall does not allow any traffic to pass between its interfaces, unless specifically allowed to do so by an access list – this is called implicit deny.

So that this article does not get cluttered with a lot of theory on how access lists work, I will provide an example of configuration that is sufficient for most small offices. If there is a need to allow access to any other resources, you will have to add access list rules in a similar fashion.

Important!
It is possible to write all access list rules using only the numerical IP addresses, but for the ease of future administration it is considered best practice to first create named objects that describe the group of IP addresses that they contain. After that, all rules in access lists reference these named objects. This is the more practical and convenient way of configuration. Let’s start with an access list that allows access from the local LAN to the Internet. Here are the rules that we need to configure:

ICMP access from any host on the local LAN to any outside resource, allowing to send ping commands:
FW-DELTACONFIG(config)#
access-list ACL_INSIDE_IN extended permit icmp object-group NET_LAN any

Explicit ban for all other connections. Using the keyword “log” at the end will allow us to view all attempts that were blocked by this access list in our system log.
FW-DELTACONFIG(config)#
access-list ACL_INSIDE_IN extended deny ip any any log
The order of rules in an access list is extremely important! First, the firewall processes the topmost rule, then the one that is below it, and continues so until it gets a match on the addresses and ports in the packet or until it hits the end of the access list. If you put your deny rule in the middle, everything else below it will get ignored and the required access will not be granted.

After you have listed all the desired access rules, you need to assign the access list ACL_INSIDE_IN to the “inside” interface. Until you do so, the access list does not affect the traffic going through the firewall in any way. In order to assign it to an interface, use the following command:
FW-DELTACONFIG(config)#
access-group ACL_INSIDE_IN in interface inside
On top of that, lets allow to automatically accept ICMP replies:
FW-DELTACONFIG(config)#
policy-map global_policy
class inspection_default
inspect icmp
The access list controlling the outside interface will be smaller, since we only need to allow access to the web server inside our office. This rule will supplement the NAT rules, specifically the one that translates the internal private IP address of the web server into the public IP address assigned to the firewall’s “outside” interface.

Now our configuration has both the static NAT rules and the access list rules that allow the traffic. Consequently, any host out in the Internet trying to connect to the IP address configured on the “outside” interface of our firewall (200.150.100.2) and TCP port 80 (HTTP protocol) will be allowed access and translated into a request to connect to the internal IP address of the web server (192.168.10.200).

All the functions and configs above are typically present in every Cisco ASA firewall setup in every office. I hope this simple article will help you with your tasks. Don’t hesitate to write me if you have any questions.

Don’t forget to save the changes you made to the configuration with the write or copy run start/ commands. Otherwise you will lose all changes after the next reload.
FW-DELTACONFIG-1#write
Building configuration...
[OK]

This video could help you better understand basic configuration of Cisco ASA.

Thank you very much

Very informative. Thanks for sharing.