Sooner or later, every network administrator encounters a channel going down, whether it is an ISP uplink to the Internet or a WAN circuit to some other resources. Most of the time this serves as that “a-ha” moment that forces us to think about creating some kind of a backup mechanism (too bad that we didn’t think about such things in advance!). Yet, if there are two ISPs available, you have the opportunity to configure a redundant connection scheme that will help you avoid downtime.

Ideally, you would place a router, connect two ISPs to it, reserve an autonomous system with public IP addresses and configure a fully redundant connection scheme with BGP protocol (Cisco ASA series support BGP only on 5500X models and with the latest versions of IOS). However, this approach suits only large companies with enough resources, capacity, and trained personnel.

In most cases configuring a backup ISP to be used in case of main channel failure is the most adequate solution. Cisco ASA devices have the capability to monitor the availability of the primary ISP channel and switching over to the configured backup in case of its failure (when the gateway fails to respond to ICMP requests over several seconds).

Let’s see how we can configure this. 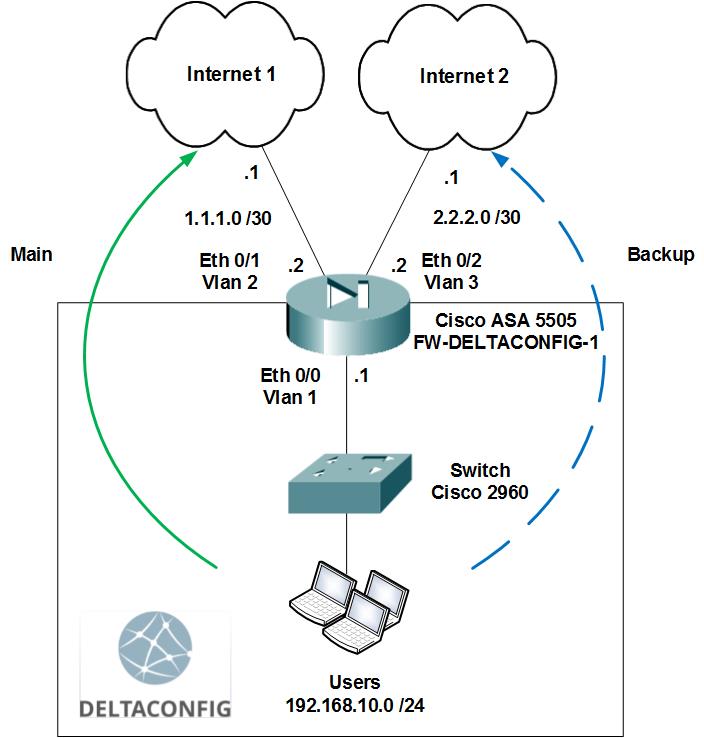 Let us look at the following example:  we have a Cisco ASA 5505, which connects our office to the Internet through ISP 1 via the Ethernet 0/1 interface. You can read the detailed setup in the “Cisco ASA Basics. Connecting to the Internet” article. We have connected an additional service provider, ISP 2, to the interface Ethernet 0/2 (see the diagram).

First, let us check the current configured routes on the device. The easiest way to do so will be the “sh run | inc route” command, which will output the running configuration lines that contain the word “route”:
FW-DELTACONFIG-1# sh run | inc route
route outside 0.0.0.0 0.0.0.0 1.1.1.1 1
If we translate this into normal language, we will get the following:
“Redirect all packets, which I don’t know, into the “outside” interface through the gateway 1.1.1.1”
Cisco ASA “knows” only those networks that are directly connected to its interfaces or that are entered as routes in its running configuration.

Step 2. Configure interfaces for the use of secondary ISP

Additional information:
timeout 3000 – is the timeframe within which Cisco ASA will await for an ICMP response. 3000 => 3 seconds
frequency 5 – how often to send the requests. Here is every 5 seconds
threshold 10000 – a delay for the operation of 10 seconds, during which no actions are taken

Step 4.  Configure the default gateway for the backup ISP

Important!
You should take into consideration any other configured static routes on your device.

Important!
You also have to configure the access lists and NAT rules to use the backup ISP. Add identical rules and apply them to the outside_backup interface.

Don’t forget to save the changes you made to the configuration with the write or copy run start commands. Otherwise you will lose all changes after the next reload.