How to add a route

By default, any router or firewall is aware only of those networks and subnets that are directly connected to it. This applies likewise to Cisco equipment and any other vendors. If a device has 2 interfaces with IP addresses from different networks assigned, it is capable of forwarding packets between two connected hosts, routing the traffic. That is, of course, if the hosts have that device configured as their default gateway. 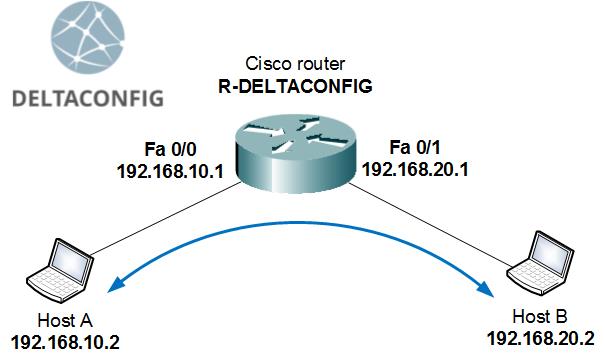 The above example is oversimplified and is almost never used in real life. Let’s consider a more complex and realistic scenario: we have two locations in a company, with each office having its own LAN that is connected to a router. Between the two offices there is some kind of a point-to-point link.
In this case, by default, each router will only be aware of its LAN and of the link between the offices, but will not know where to forward the packets destined for the other office’s LAN. If you issue a ping command, each router will be able to access the outside IP address of the other router, but will not be able to reach any address inside the remote LAN.

Important!
If you add the route on only one router (left), then a packet from host A to host B will traverse the network in one direction, but will be discarded upon trying to return – since there is no route back to the originating subnet. Each network device that forwards packets needs to know routes for both the source and the destination of a packet, no matter how many such devices a network has.

You can configure routes not only for entire networks, but narrow them down to something more specific, like a single host. For example, a route from the above example only to host B will look like this:
ip route 192.168.20.2 255.255.255.255 10.0.0.2
You can also combine several routes to different subnets that are available through the same gateway – summarize.
For example, you can combine routes to four subnets that are reachable through the same gateway into one route for a broader network by changing the subnet mask.

Important!
A narrower route to a specific network will always take priority over a summarized route, no matter the size of the subnets used.

For better understanding, let’s consider a third example that is closest to a real-life scenario. Our two offices from the above example have not only the WAN link between them, but also links to the Internet. 1.1.1.1 и 2.2.2.2 are the IP addresses provided by the ISP that are to be used as default gateways. 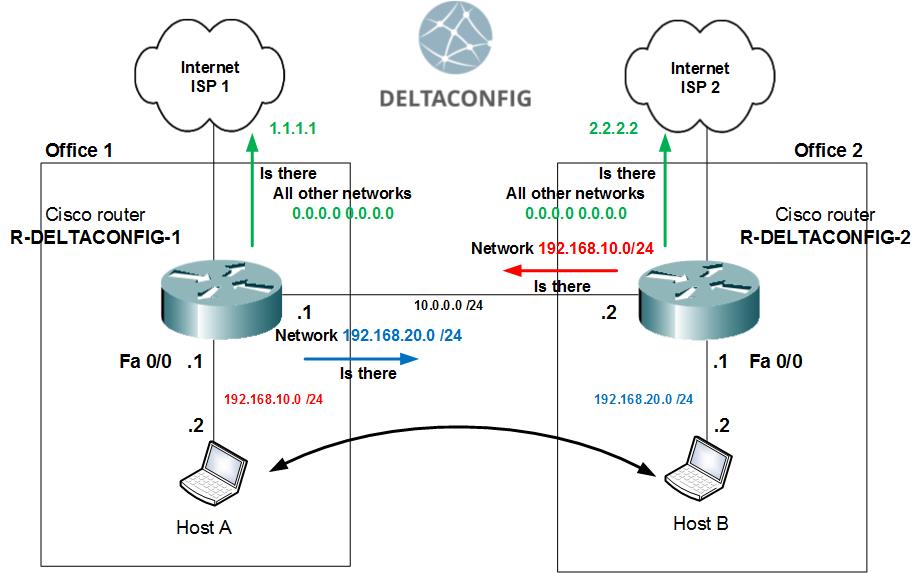 For Router 2 (the one on the right)

These routes will tell each of the two routers to forward packets destined for the remote office subnet to the neighboring router, while all routes with unknown networks (Internet) should be forwarded to the ISP default gateway.

Important!
Once again, the order of the routes inside the configuration does not matter. The priority is always given to the narrowest and most specific route. If there is no route available for a specific subnet in the routing table, only then the router will send the packets to the default gateway.