Before getting into the configuration details of Cisco ASA backup scheme (called failover), I would like to point out a few rules regarding the technology itself:

– Of the two Cisco ASA devices that have been combined into a cluster and configured to work in the failover mode, only one (!) device will be active and forward traffic.
– In order to create a Cisco ASA failover cluster, you need to have two devices of the exact same model, for example Cisco ASA 5515X
– both devices need to have the same IOS image installed, for example 9.4(2)6
– failover WILL NOT work if your Cisco ASA is configured to connect to the ISP through PPPoE protocol

There are exceptions to these rules, but I am deliberately not mentioning them in this article, so that the possible problems with the configuration can be brought to a minimum. 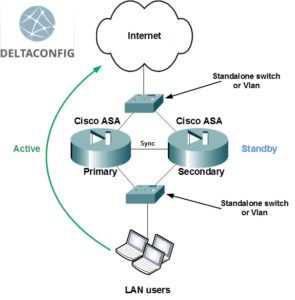 Before you begin to connect and configure your Cisco ASA devices, make sure that the IOS versions on both ASA are identical and supports the failover mode. Use the “sh ver” command for that

If you have different versions of IOS installed, upgrade it on one of the devices.

A brief explanation:
STATE – the name of the interface
primary – indicates that this is the primary device. Should not be confused with the device’s current role – active or standby. A device may be currently in standby mode for passing traffic, but will be the primary device in the cluster.
10.0.0.1 and 10.0.0.2 – these are the IP addresses for the synchronization interfaces on both Cisco ASA. You can enter any address pair that you want, but make sure that they are from the same network and are unique to your LAN.
Warning!
At this point of configuration, both Cisco ASA devices should NOT be connected to each other in any way. ONLY the device Cisco ASA #1 should be powered on. The second device should be set aside, waiting for its turn to be configured.

Before configuring the second Cisco ASA, erase all configuration on it and disconnect all patch cords.
FW-DELTACONFIG (config)#
clear configure all

Activate the failover mode on Cisco ASA #2. The synchronization interface and failover configuration commands will be identical to the ones entered on Cisco ASA #1, with the exception of the device sequence. Here you should specify “secondary“.
FW-DELTACONFIG (config)#
interface GigabitEthernet0/3
description STATE Failover Interface
no nameif
no security-level
no ip address
no shutdown

Save the configuration and turn off the device completely.
FW-DELTACONFIG (config)#
write

Connect the synchronization interfaces (Gi0/3 or the ones you have chosen in Step 1) on both devices to each other and turn on Cisco ASA #2. When it boots, you should see an informational message on the console stating that it has found a mate for synchronizing configuration:
Beginning configuration replication: Sending to mate.
End Configuration Replication to mate

Note the state of the Secondary device. In our example it is Standby Ready. This means that everything works as it should.
If the state is shown as “Other host: Secondary – Failed“, then your failover is not working. Check that the Cisco ASA #2 device is powered on, that all its interfaces are connected in the same manner as Cisco ASA #1 and whether you have identical IOS versions on your devices.

The failover algorithm
1) When powered on, a Cisco ASA device checks if there are cluster neighbors available, and if it finds one, it enters the Standby role and copies the entire running configuration from the Active device. After this it becomes the standby devices and waits.

2) If the just powered Cisco ASA device does not find a cluster neighbor, it will enter the Active state and work as a standalone device.

3) If everything is configured correctly and the devices states are Active/Standby, then the roles will switch upon following events:

– you manually switch the role from the console of the active device through issuing the command “no failover active“. This forces the devices to switch their Active and Standby roles and the traffic starts flowing through the neighbor device.
– automatic failover occurs if the Active device experiences a failure of at least one interface. If the same interface on the Standby device was already inactive, the failover will not happen.

If one of the interfaces on the Active unit (Cisco ASA #1) has experienced a failure and the devices have switched their roles, with #1 becoming the Standby unit, and then the failed interface is restored, there will be no automatic switch back to the original state. The Secondary device will remain in the Active state up until it experiences a failure itself or you manually switch the roles (see “no failover active” above). You do not have to do anything about this.

Primary and Secondary – are the index numbers of the devices. They have no specific impact on your network.
Active and Standby – are the device’s roles. They define which device is currently being used to pass traffic.

For reference:
A common question that comes up with failover usage is: how do you connect the external ISP link into both firewalls at the same time? How do you make two cables from one?
The answer is rather simple – use a switch. Take a LAN switch that you are already using and connect Cisco ASA #2 to ports that have the same VLAN configuration as those, to which Cisco ASA #1 is connected. Or use a separate device.
A simple 8-port switch for $10-$20 is sufficient. Connect the ISP cable into port 1 and use ports 2 and 3 to connect to both Cisco ASA devices. This option is the simplest, cheapest and easiest to implement. If your switch goes out of order, you can easily replace it with a similar one within 5 minutes. You need to have one such switch or a Vlan for every common interface on the ASA devices.
If your budget allows it, I would recommend getting a Cisco 2960 switch for reliability and configuring the needed number of VLANs for each pair Cisco ASA interfaces.

Do not forget to save your configuration on the Active devices with the “write” or “copy run start” command. Otherwise all your changes will be lost upon reload.
FW-DELTACONFIG-1#write
Building configuration...
[OK]