Sooner or later, but every company faces the problem with the Internet connection being out of order. And right after that, the question about backup channel arises. What settings needed to be done to automatically switch to backup link in case of an accident?

One of the easiest and most effective ways to configure a Cisco router – is using the IP SLA monitor. The device will track the availability of the primary Internet provider, and once the connection is lost (certain address won’t respond to ICMP requests during several seconds), it will forward traffic through the backup link. 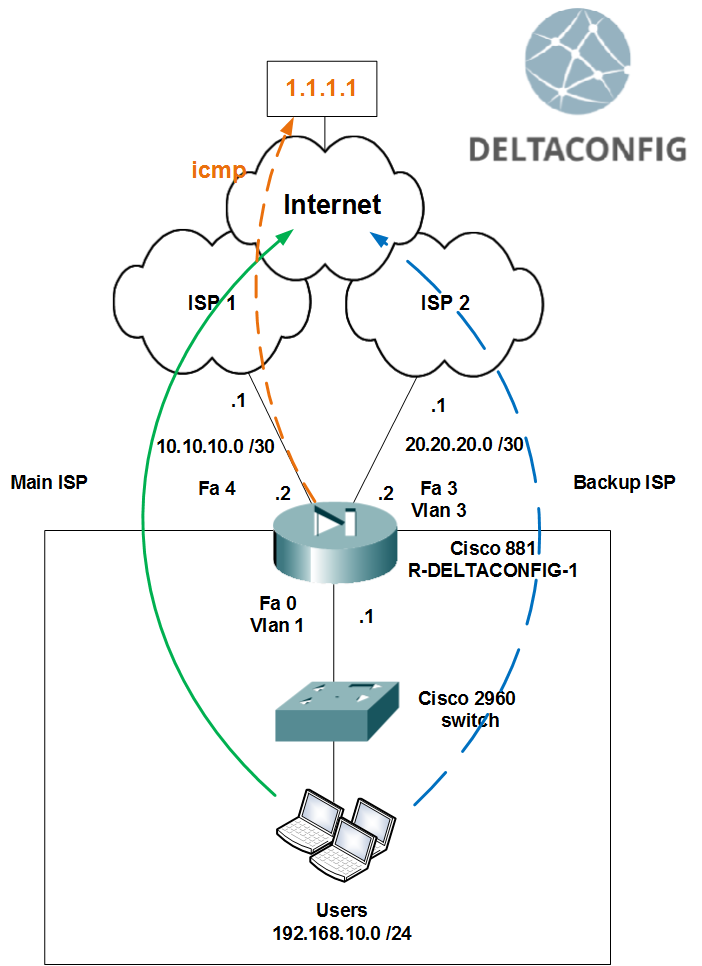 Let’s take a look at the settings, considering the example of a standard router model for small office – Cisco 881.

If you have another model of a router, then, the difference will be only in the name of the interfaces, but not in the settings itself.

Translating from the device’s language to a more understandable, “human” one, it will sound like this:
«Forward all packages, about which I know to the outside interface through the gateway 10.10.10.1».
Router “knows” only about networks, which are connected to it directly or for which the routes strings are set up.

On the router, the outside interface Fastethernet 4 is already set up. Here the primary ISP is connected. So In current configuration (can be shown using command sh run) there will be strings similar to these:

Now, let’s add the settings for the backup link, that is connected with Fa 3/ Vlan 3.
Firstly, we need to create Vlan to connect the backup service, bind it to one of its free ports, and after that set an IP-address.

To check current settings, you can use command sh current, without leaving the VLAN configuration mode. It’s enough to have Vlan 3 in the list of existing interfaces.

And right after that set an IP address and activate the interface using the command no shut.

If all the wires are connected and the settings are correct, then the gateway of the backup provider should be available from the Cisco 881 router.

In order to make Cisco 881 router track the availability of the primary link, it is necessary to configure the IP SLA monitor feature. In equal time intervals, the ping (ICMP request) will be sent on the 1 provider’s gateway address (the main one). The receival of the responsive package (ICMP response) means the availability of the channel.

In most cases, both the address of the external interface and an ISP gateway are known beforehand. So, that’s why it is enough to check only the availability of the provider gateway address. But here’s a trick. What will happen if the gateway is still available, but the fault has turned out being somewhere in the provider network? I.e. “the Internet isn’t working”, though the gateway is accessible. Actually – nothing. The router would not recognize the fault, and it won’t switch to the backup mode. Another similar case is when an ISP provides a dynamic address, for example, using PPPoE technology.

To avoid such a case, usually, the stable working address on the Internet is being chosen, which can be located in any place in the world. Then, on the Cisco 881 router, the static route to the chosen address through the gateway of main ISP is being set. And the availability of the default gateway to the side of the main provider is being placed depending on the availability of the chosen address. Then, whatever happens with the connection, whether it is with the router settings problem, connection operator disruption or other reason, the switch to the backup ISP will be performed automatically. At the same time, the disadvantage of such approach is that the needed address always will be unavailable along with the primary provider. For such aims, I recommend using the address 1.1.1.1, which is stably available but is used quite rarely in daily users’ or devices work.

It is written kind of complicated, isn’t it? Let’s simplify it for the algorithm of the 881 router’s actions:

Now, we are setting the static route through the main provider to the address 1.1.1.1

Step 4. Checking the work of the tracking tool.

For checking the tracking work of the IP SLA the command sh ip sla statistics is used.

Before executing any of the following steps check the output of this command several times, to make sure that the counter of the successes grows over time. That means that the main channel is working stably and can continue the configuration without the risk of losing the connection with the Internet.

Step 5. The default gateway for the backup provider.

For backup provider, the default gateway is required to be specified, where the Cisco 881 router will send all the packages, but with one difference – this route shouldn’t be considered when the primary provider is available. To enable this, lower the route priority, that is also called as ‘administrative distance’.  In other words, it has to be longer.

By default, the value of the administrative distance for a static route – 1.
Let’s set for the backup channel the value, that is close to maximum – 250 (very expensive)

After such update, in the Cisco 881 router configuration has to be 2 default routes.

The final step is to bind the main route to the tracking function by the channel availability (IP SLA). Firstly, we have to add the new string for the default gateway marked as ‘track 1’ and remove the old one.

After that, in the final Configuration, there will be two strings for the default gateways.

Important note!
If the route strings exist for some networks, besides the default gateway, then you should take into account their presence during configuration, thinking through the switching logic similarly to the default gateway.

The most important thing, that distinguishes the dual wan configuration on Cisco 881 and Cisco ASA routers – is the necessity to reconfigure the translation rules of the NAT (conversion of the internal private addresses into public ones of the external interface). If for Cisco ASA it is enough to duplicate the NAT settings for the backup provider, then for Cisco routers it is necessary to reconfigure the command logic.

The ‘Regular’ NAT settings to access the Internet, for users, boil down to selecting the range of the internal addresses and adding the rule “translate ‘these addresses’ into the external interface address”. In fact, it is just the description of the traffic, BEFORE it gets into the internal router interface.

In case of the realization of a resilient switching to the backup ISP using the IP SLA feature, it is necessary to use the route-map. It is the extended function of the traffic control flow, in which  the condition (which traffic) and action (what to do with it)  is specified. In our case, for each of the providers, a route-map is created only with “conditions”, which are:

Then, you need to add rules for NAT, which refer to the route-map.

Don’t forget to check, that on each of the three interfaces, through which the traffic is passed, there are strings about belonging to the NAT.