This material follows up on the topic covered in the Configuring VPN between two Cisco routers, but is being dedicated an entirely separate article, since it deals explicitly with configuring Cisco ASA devices.

The task will again consist of connecting a main and a branch office through VPN, but this time the main office works on a Cisco ASA 5510 firewall instead of a Cisco 2800 router.

At our disposal we have:
Cisco ASA 5510 firewall in the main office

Router Cisco 881 at the branch office 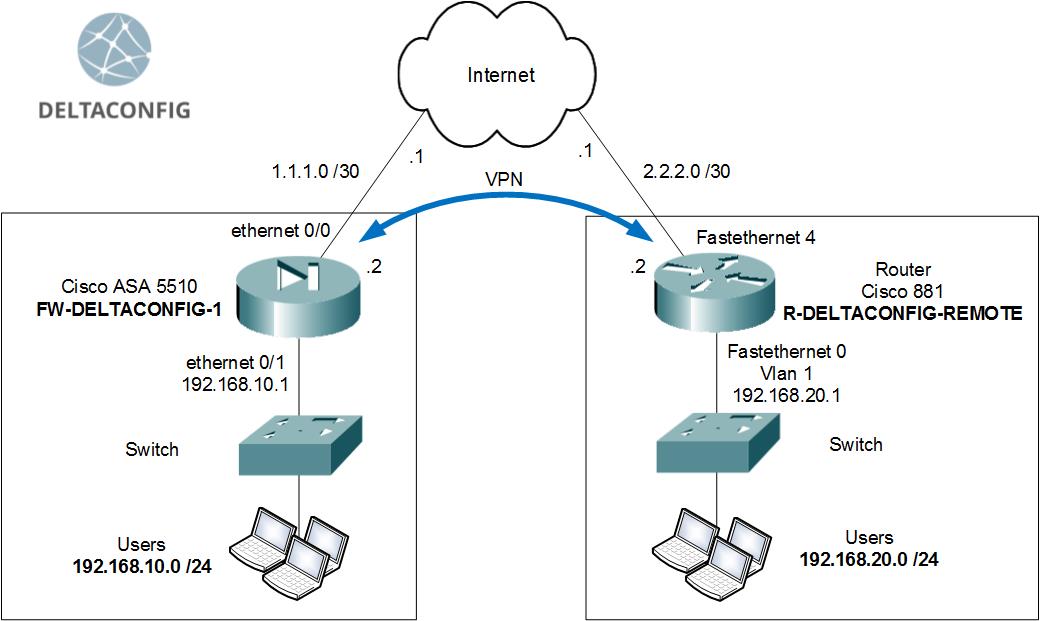 The process of configuring the Cisco 881 router has been described in the “second universal method” section for configuring VPN tunnels in the article  Configuring VPN between two Cisco routers, so here we will focus only on configuring the Cisco ASA firewall. The firewall is already configured with the basic settings outlined in Cisco ASA. The Basics. Internet access article:  it is accessible for remote administration and the office LAN can reach the Internet.

If your ASA IOS version is older than 8.3 (you can check the current version with the “sh ver” command), then turn off nat-control option for the ease of configuration:

First, let’s check that our firewall has correctly configured outside and inside interfaces. Since we are working on Cisco ASA 5510 model (as opposed to 5505), this configuration is slightly different than the one mentioned in the initial article. The IP addresses and other parameters are assigned directly to the physical interfaces Ethernet0 and Ethenet1 instead of the virtual VLAN interface.

Here we configure the encryption parameters for the VPN tunnel between the main office and the branch location and turn on the VPN on the outside interface. These parameters are identical to the ones used on the Cisco 881 router at the remote site:
For IOS version less than 9.0
FW-DELTACONFIG-1(config)#
crypto ipsec transform-set ESP-3DES-SHA esp-3des esp-sha-hmac
crypto isakmp policy 1
authentication pre-share
encryption 3des
hash sha
group 2
lifetime 86400
crypto isakmp enable outside

Step 3. Define the “interesting traffic” that should be encrypted and sent into the tunnel

Create an access list named ACL_CRYPTO_DO, in which we define the traffic that needs to be encrypted into the VPN tunnel, this is called “interesting traffic” in Cisco. All other packets will not be routed into the VPN.

Instead of XXXXX enter the key you wish to use for the VPN with the remote peer. It needs to be identical on both the Cisco ASA in the main office and the Cisco 881 at the branch office. I recommend making it complex, no less than 50 symbols, using digits, letters and special characters.

If the Cisco ASA is used for user access to the Internet (Dynamic NAT is configured to translate internal addresses to the outside), you need to prevent unneccessary translation of packets which should be routed to the private ip networks through the tunnel. In order to avoid this add these strings

If this won’t be done, the tunnel will be established, but packets will not be transmitted.

You can check the tunnel with the following commands:

Any state except (!) MM_ACTIVE means that the VPN is not working. If it is taking more than one minute in order to establish the tunnel, you need to check all the configured encryption parameters and ensure that they are identical on both VPN peers.
If this command does not produce any output, then you are probably missing some part of configuration – for example, you did not aplpy the crypto map to the outside interface.

Important!
Please note that the VPN tunnel does not come up when there is no traffic to be encrypted between two devices.

Don’t forget to save the changes you made to the configuration with the write or copy run start/ commands. Otherwise you will lose all changes after the next reload.
FW-DELTACONFIG-1#write
Building configuration...
[OK]